The welcome cocktail will take place on August 29 at 6:30 PM at the École Vincent d'Indy in room 450 to start off the 2018-2019 season of the MRS with a bang.  There will be a presentation about the MRS and the upcoming season.  It will be possible to sign up for the upcoming year during the evening.  Everyone is welcome, especially people considering joining the society for the first time. 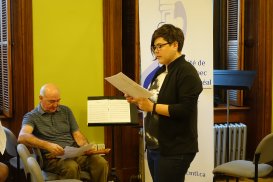 The Annual General Meeting took place on Thursday with more than 40 persons attending. The traditional wine and cheese crowned an evening that confirmed the dedication and dynamism of the members of the Montreal Recorder Society. We underlined the departure of a musical director and two long-time volunteers. Diane Koch, a member of the Administrative Council since 1997 in various capacities including Program Director for the past several years and pillar of the MRS, resigned from her position and will be replaced by Chantal Perreault, an advisor who efficiently arranged all the renting of rooms for the past several years. Angèle Latulippe, a certified accountant, Treasurer of the AC for the past 16 years and guardian of the financial health of our organisation, also resigned from her position and will be replaced by Carole Dufour, who is also a certified accountant. Caroline Tremblay, the director of the groups Discover the Recorder and Harmonia, who directed groups of the MRS for almost the past 20 years, starting from when she was fresh out of CÉGEP, left the direction of her groups to pursue a career in Quebec City. She will nevertheless remain responsible for a sight-reading session and we will certainly meet her in the recorder environment in Montreal. It is Vincent Lauzer who will replace her for these two groups, and Marie-Laurence Primeau, a newcomer as group director, who will take the group Recorder for Fun.

The Administrative Council wishes to express its recognition and sincere thanks to Diane, Angèle and Caroline for their dedication and their precious contributions.
We underline the arrival of new faces in the Administrative Council, which bears witness to the interest that the members show for their organization and their dynamism. Aside from Carole Dufour as Treasurer, Sylvie Homier and Gérard-Philippe Ouellet were elected as advisors and Ronan Da Silva was elected to the new position of Coordinator of Volunteers. We are glad to welcome them to their new roles and we look forward to working with them.

Music was not forgotten during that evening. The groups Recorder for Fun, Harmonia, Flute en Suite, La Follia and Flutissimo all played pieces. Femke Bergsma directed Flute en Suite and La Follia as a replacement for Gilles Plante and Francis Colpron.

The Annual General Meeting marks the end of a very full season and promises good things for the next season! Thanks to everyone! 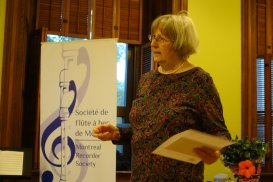 A note from Diane Koch, outgoing Program Director and Past President
17 June 2018

Thank you to all members of the Montreal Recorder Society for the beautiful plant you have given me.  I will certainly look after it and keep it beautiful so that I will be able to have it for a very long time, remembering all of the wonderful times I have had with the AC.

Elections for the positions of Vice-President (2 years), Treasurer (2 years), Program Director (2 years), Advisor (2 years), and Volunteer Coordinator (2 years) will be held at the AGM at 7 PM on June 14, 2018 at the EMVI.  If you would like to be a candidate, you can make yourself known on the day of the elections. See the description of the responsibilities of the different positions.

The AGM will be held at the ÉMVI at 7 PM on June 14 in room 236.  During the AGM, we will talk about, among other things, the progress of the strategic planning and we will hold the elections of the administrators. After the AGM, we’ll make room for music and celebration with the group concerts and a wine and cheese to celebrate the end of the season!

Enter you email in the field below. We will send you a reminder.
An email containing your password was sent to you.